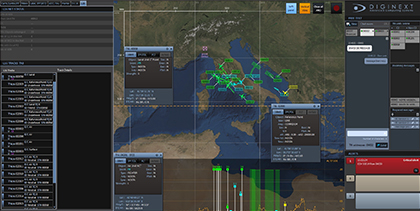 The Theater of Operation over Mali SERVAL, considering the strains and lack of permanent radars means (the radar coverage of the Operational Armed Forces’ progression area is only obtained in the presence of the AWACS) makes the coordination in 3D particularly difficult. Joint Forces Chief is thus deprived of a part of his freedom of action, reducing his ability to choose the necessary means and to assure an efficient flow of actions.

To improve the interaction between C2 centers in charge of the 3D coordination, DIGINEXT has equipped the French Armed Forces with three JRE systems to extend the L16 from a line-of-sight capability to an over-the horizon capability.